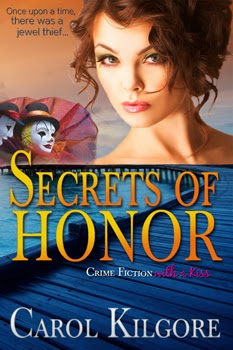 SECRETS OF HONOR by Carol Kilgore

By the end of a long evening working as a special set of eyes for the presidential security detail, all Kat Marengo wants is to kick off her shoes and stash two not-really-stolen rings in a secure spot. Plus, maybe sleep with Dave Krizak. No, make that definitely sleep with Dave Krizak. The next morning, she wishes her new top priorities were so simple.

As an operative for a covert agency buried in the depths of the Department of Homeland Security, Kat is asked to participate in a matter of life or death—locate a kidnapped girl believed to be held in Corpus Christi, Texas. Since the person doing the asking is the wife of the president and the girl is the daughter of the first lady’s dearest friend, it’s hard to say no.v
Kat and Dave quickly learn the real stakes are higher than they or the first lady believed and will require more than any of them bargained for.

The kicker? They have twenty-four hours to find the girl—or the matter of life or death will become more than a possibility. 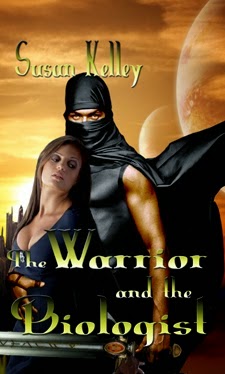 The Warrior and the Biologist by Susan Kelley

An alien invasion pushes mankind to the point of extinction. The raynids prey on humans as a food source, swarming through the universe like locusts from a nightmare. A small band of survivors of the distant planet of Gaviron hunt the monsters but they’re slowly losing the war.

Biron, highly-trained and gifted warrior of Gaviron, reluctantly agrees to a last desperate strategy. The goal isn’t to defeat the raynids but to make sure a few small pockets of humanity survive. To do his part, Biron takes on the role of protector on the small Earthling colony of Blithe. In exchange, the people of Blithe must offer up one of their women as Biron’s bride so that a small piece of Gaviron will live on. Heartbroken by the years of fighting the raynids and losing everyone he’s loved, Biron doesn’t care who he marries. Esta Brunner, intelligent, brave and attractive, makes as good a choice as anyone.

Esta agrees to the terms of their Gaviron saviors. And as she and Biron fight against their common foe, her alien husband’s easy charm and physical beauty ease the discomfort of the forced marriage. Their fledging relationship comforts them both until another danger intrudes on the planet. Once the fragile trust between them is broken, Esta realizes how much she’s come to care for her lonely husband.

It will take Esta’s clever mind and Biron’s knowledge and skills together to defeat the raynids. Before they can trust each other again, Esta must accept the depth of her love for her husband and Biron must learn what love is. 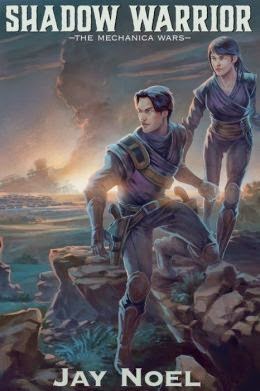 The agony of a failed quest haunts Kanze Zenjiro, but the betrayal by those he trusted has turned his world upside down. With a heart full of hatred and defeat, Zen is desperate to get back to Nihon and demand the truth from his father.

Meanwhile, the Iberian Empire sends their soaring airships and steam-powered giants into The Orient. They threaten to upset the balance of power, hoping to exploit the faraway land in their greed for the resources needed to power their machines. Zen and his companions must fight to keep the world from plunging into total destruction.

And at the center of it all is a nine year old boy with the power of a god.