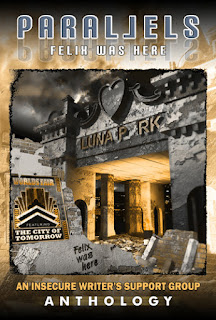 The Insecure Writer’s Support Group anthology, due out this spring.

Enter the realm of parallel universes!

What if the government tried to create the perfect utopia? Could a society linked to a supercomputer survive on its own? Do our reflections control secret lives on the other side of the mirror? Can one moment split a person’s world forever?

Hand-picked by a panel of agents and authors, these ten tales will expand your imagination and twist the tropes of science fiction. Step through the portal and enter another dimension!

The Galactic Outlaws Book One: The Outlaw's Prize by Susan (Gourley) Kelley
Buy it at New Concepts Publishing

She didn’t believe in heroes until he kidnapped her.

Infamous smuggler Quin kidnaps Dr. Bess Smith with the best intentions. But a few days in the feisty physician’s presence turns his thoughts in a less honorable direction. Soon he’s figuring out ways to keep her.

Bess isn’t impressed with Quin’s good looks and easy charm until she starts to believe he is sincere in his flirtation. Despite the grim medical emergency they battle together, for the first time in her life, she experiences the thrill of adventure with the handsome smuggler.

Then a terrible betrayal exposes the secrets they’ve kept from one another. Secrets that may cost Quin his life and send Bess back into the isolation of her research laboratory. Can she trust a man she believes only used her own ends? Or is he really the self-sacrificing hero she hopes he is? 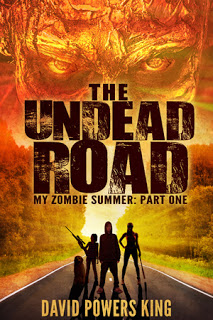 The Undead Road: My Zombie Summer: Part One by David Powers King
Buy it at Amazon

Nothing brings the family together like a zombie apocalypse … Fifteen-year-old Jeremy Barnes would rather watch a zombie movie than shoot a real one, but he has no choice if his family wants to survive the end of the world. Their plan? Drive across the infected United States to a cabin in the Colorado Rockies without a scratch, but their trip takes a complicated detour in the middle of Nebraska when they find Kaylynn, a girl who can handle a baseball bat better than Jeremy can hold a .45 Beretta. And when they stumble into a sanctuary, Jeremy soon learns that Kaylynn is stronger than she looks—a deadly secret lies inside her. After the radio picks up a distress call from Kansas City about a possible cure, Jeremy’s parents go with a team to investigate. They never return. The only way to find their parents is for Jeremy and his sister Jewel to rely on a dangerous girl who might just turn on them at any moment.