New Release and Supporting a Friend

Many of you know Joylene Nowell Butler, author and The Insecure Writer’s Support Group admin. Last week, she broke her hip and underwent surgery on Friday. As a result, she is unable to share in the joy of her IPPY award-winning book being released as an eBook for the first time.

One thing that’s great about this online community is the support. If any of you can share this week, that would be wonderful. (Many already answered the call on Facebook - thank you.) I’m going to save all the links to those posts and send them to her. It will cheer her to see that others were willing to step up to the plate on her behalf.

Available today for the first time in eBook form - 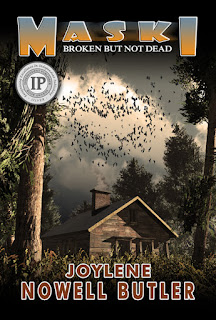 To the Breaking Point...

When Brendell Meshango resigns from her university professor position and retreats to her isolated cabin to repair her psyche, she is confronted by a masked intruder. His racial comments lead her to believe she is the solitary victim of a hate crime.

However, is all as it appears? After two bizarre days, the intruder mysteriously disappears but continues to play mind games with her. Taught by her mother to distrust the mainstream-based power structures, and with her stalker possibly linked to a high level of government, Brendell conceals the incident from the police. But will her silence keep her safe?

Then her beloved daughter, Zoë, is threatened and Brendell takes matters into her own hands. To save Zoë, Brendell searches for the stalker and confronts not just a depraved madman but her own fears and prejudices.


“Joylene Nowell Butler gets straight to the story, taking you from one happening to the next and keeps you turning the page.” - Martha A. Cheves, author

“Riveting and beautifully written. You won't be able to set it down.” Judith S. Avila, author

Joylene, Métis, is the author of Dead Witness, Broken But Not Dead, and Break Time. She and her husband and their two cats reside in Canada for the summers and Nayarit for the winters. They believe life should be an adventure.
Blog / @cluculzwriter / FaceBook